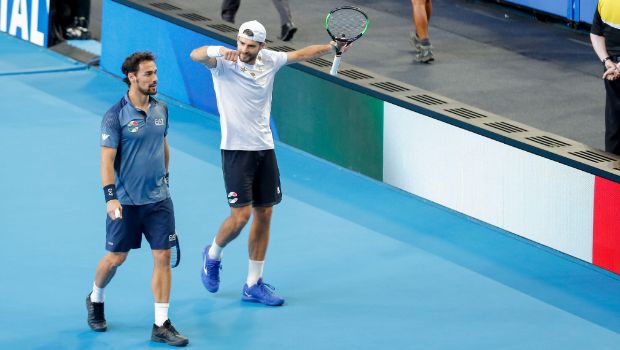 Italy registered a comprehensive 2-1 win over the United States to seal a berth in the semi-finals of the Davis Cup. With a stunning victory, Italy advanced to the tournament’s semi-finals for the first time in eight years. Italy’s doubles pair of Simone Bolelli and Fabio Fognini defeated Jack Sock and Tommy Paul in a thrilling decider in Malaga. The Italian duo delivered a flawless play to secure a straight set 6-4, 6-4 win, and guided their team to reach the semis for the first time since 2014.

Lorenzo Sonego gave Italy a shock lead by outplaying Frances Tiafoe of America in the first match. Sonego made the most of his huge serve to upset the 24-year-old American 6-3, 7-6 (7) and gave the Italians a 1-0 lead. Sonego held his nerve in a tight second set to get past Tiafoe and put Italy ahead. Many felt that it would be tough for Italy to qualify for the semis since they are playing without the injured duo of Matteo Berrettini and Jannik Sinner.

The 27-year-old Italian drew first blood to make it 4-2 and then saved a break point before sealing the first set. Sonego, who lost his previous meeting with Tiafoe in Paris this year, saved two set points in the second set and forced a tiebreak. Though Tiafoe grabbed an early lead in the tiebreaker, his opponent came back strong and closed out the victory on his third match point.

But Italy’s joy was short-lived as America’s Taylor Fritz tied the scores 1-1 by defeating Lorenzo Musetti 7-6 (8), 6-3. Battling from the brink in the first set tiebreak, Fritz showed a never-give-up attitude and stood strong to drag the 32-times title winners back into the contest. Fritz’s victory paved the way to set up the double’s decider.

The USA holds a record 32 Davis Cup titles, but it has not won a title since 2007. The captain of the USA team, Mardy Fish expressed his disappointment stating that he wanted to win the trophy for a very long time as a player and captain but it is not going to happen this year and it stinks. He said it was a bummer that they would not be taking home the title.

Italy will face Canada for a place in the final on Saturday. Canada clinched a thriller against Germany to book the last semi-final spot. Croatia will take on 28-times champions Australia in the other semi-final.