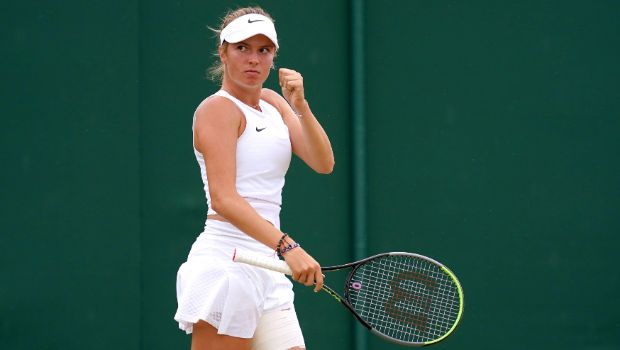 Linda Fruhvirtova pulled off a comeback win over no.3 seed Magda Linette to lift her first WTA Tour singles title at the Chennai Open. The 17-year-old Linda Fruhvirtova won the last five games of the deciding set to capture her maiden WTA Tour crown, beating Magda Linette of Poland in three sets 4-6, 6-3, 6-4 to complete her breakthrough week on Sunday. Fruhvirtova was down 4-1 in the third set, but raised her levels and produced an excellent battle to secure a remarkable win.

The 30-year-old Linette was the early leader, breaking for 5-4 in the first set with a forehand winner off of a drop shot. Ahead for the first time all day, she then ran with that opportunity, holding serve at love to take a one-set lead.

But Fruhvirtova eventually produced a good fight to turn the match around, earning her first break of the match for a 5-3 lead in the second set. The Czech player leveled the match by consolidating in the next game. She continued with the momentum to close out the set where she never faced a break point.

Linette got her first break of the decider set with a forehand winner. She played with confidence to take a 3-1 lead and appeared to be in complete control after making it 4-1. However, Fruhvirtova used her powerful hitting to pull back on serve at 4-3, and the Czech teen moved ahead by a break at 5-4 with a sterling return. Fruhvirtova never gave away that advantage and converted her first championship point in the following game to clinch her first singles title.

After her stirring victory, Fruhvirtova said it is something she will remember forever. The Czech player feels like it is a great start for her and will work hard to keep building on this.

In the doubles final, No.1 seeds Gabriela Dabrowski and Luisa Stefani defeated Anna Blinkova and Natela Dzalamidze 6-1, 6-2 in just 58 minutes to clinch the title.