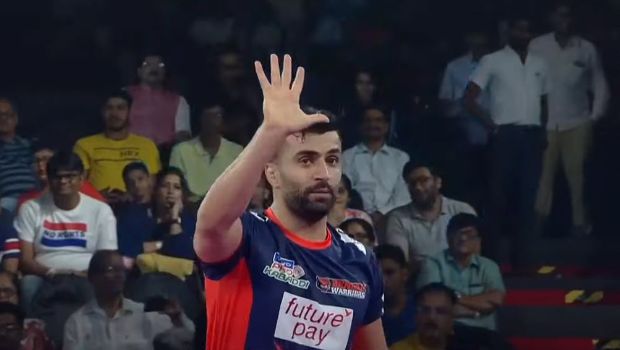 The ninth season of the Pro Kabaddi League gets underway on October 7 at Shree Kanteerava Indoor Stadium in Bengaluru. Twelve teams will participate in PKL 9, which is set to be played across three venues in Bengaluru, Hyderabad, and Pune. Teams with a new look will battle over three months to clinch the title. Fans are going to witness mouth-watering battles as all 12 teams are in full swing. Defending champions Dabang Delhi take on U Mumba in the season-opener.

The raiders will be sharpening their attacking skills while the defenders look to stay solid on the mat. It is the all-rounders who will have to be on top of their game in both departments to secure wins. All-rounders will give more depth and space to experiment, mix, and find the right team combination. An all-rounder’s skill plays a crucial role in making them game-changers. Here let us have a look at the three best all-rounders in PKL 9.

First on the list is Vijay, who was an integral part of the Dabang Delhi lineup in the previous edition. Vijay is a reliable all-rounder and helped his team win the title by consistently performing well. He mostly contributed as a raider, scoring 157 raid points along with five tackle points. Although raiding is his biggest strength, it is notable that he has scored a fair share of tackle points (69) over the years. After a title-winning season last year, Vijay will be eying to improve on his PKL 8 points tally this season.

Number two on the list is Deepak Niwas Hooda from Bengal Warriors. Hooda is one of the few players to have participated in every edition of PKL. Hooda is a well-experienced all-rounder who is comfortable both in defense and raids. He has the ability and skill to perform according to the situation and has risen to the challenges for his teams in the past. Hooda scored 117 raid points and three tackle points last season. The 28-year-old all-rounder has scored 973 raid points as well as 90 tackle points in his PKL career.

Mohammad Nabibakhsh is one of the best foreign players in PKL. The Iranian all-rounder put on a stellar show for Bengal Warriors over the last two seasons and scored 181 raid points as well as 49 tackle points. He along with Fazel Atrachali will be hoping to help and guide Puneri Paltan to a Pro Kabaddi triumph.