Pep Guardiola happy to have Man City youth on his side 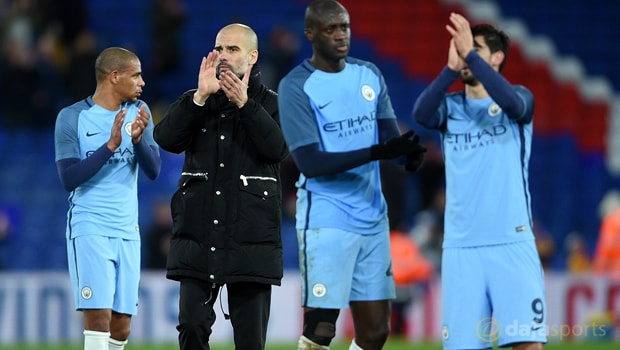 Pep Guardiola said he hoped Manchester City fans would be excited to have a youthful team after his side crushed West Ham 4-0 at the London Stadium.

The City boss selected a young trio to lead his attack against the Hammers, with Leroy Sane, Raheem Sterling and Gabriel Jesus spearheading for the Citizens.

Teenager Jesus, who joined from Palmeiras last month, scored one and assisted another on his first Premier League start while Sterling was upended by Jose Fonte allowing veteran Yaya Toure to score his side’s fourth goal from the penalty spot.

Guardiola was excited about his new look front three, saying: “We played a front three with an average age of 20.

In Europe, nobody has strikers this young. I like the fans to be excited. Those players are the future of the club.”

Sergio Aguero had to make do with a place on the subs bench but his manager denied that the Argentine is out of favour and insists he will not be reducing Aguero’s role in the starting team.

“No, I’m a guy who likes to involve as many players as possible,” the City boss responded when asked if Aguero would need to get used to being a sub.

Jesus has impressed since arriving at the Etihad last month and the City boss hopes he can scale great heights for the club in time.

“He has dreams about what he wants to do in his future career. He wants to become something in world football, and we’re going to try to get it for us,” Guardiola added.

Aguero can be backed at 7.50 to finish as the Premier League’s leading scorer this season.

Man City midfielder Yaya Toure not giving up on title talk
Barcelona becomes the most valued football club in world
We can come out with points, says India coach ahead of U-17 Women’s World Cup opener against USA