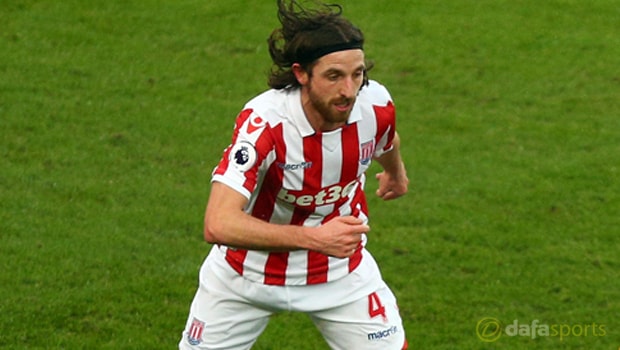 Midfielder Joe Allen is confident that Stoke can start looking up the table as they bid to catch the sides above them following Saturday’s victory over Crystal Palace.

The Potters started 2016-17 poorly leading to pressure on boss Mark Hughes but he has guided the club into a much more comfortable position as the season has progressed.

Stoke were unbeaten in 2017 until losing 1-0 to West Brom just under a fortnight ago, however, they got back to winning ways last time out against Palace.

Hughes’ side now find themselves ninth in the Premier League, having moved ahead of West Ham on goal difference, while they sit five points shy of West Brom in eighth.

Allen believes that competition for places has played a big part in improving Stoke’s fortunes and he feels they can fight to close the gap.

“I think we have a bit of everything in our midfield three which is great,” Allen said. “There have been changes throughout the season and everybody knows they can’t rest on their laurels but in recent weeks it’s worked really well.

“I think that’s one of the reasons behind our good form in 2017 and to break 30 points is a big marker in the Premier League, particularly if you consider the start that we had.

“We’ve come a long way since those first few games and the three points at the weekend means we can look upwards again at who we can possibly chase and track down.”

Stoke can be backed at 8.00 to pick up another victory next time on in the Premier League when they travel to face Tottenham, who are priced at 1.33, to win the clash at White Hart Lane, while the draw is available at 5.00.

Man City midfielder Yaya Toure keen to play down hype
Barcelona was fired by Messi to 16th Position
Ronaldo's agent rules out any chances of the player returning to the club where he started his sport...