Italian Serie A: Napoli cruise past Cagliari to reclaim the top spot 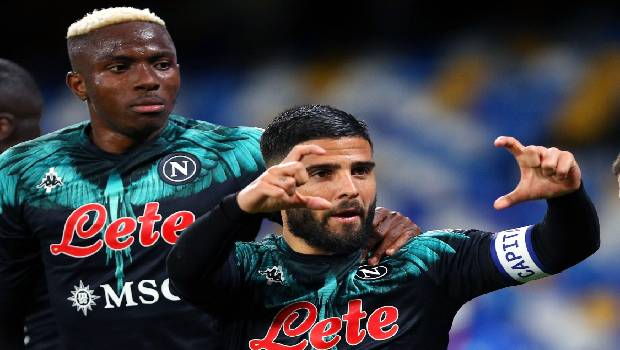 Napoli eased to a 2-0 win against Cagliari at Stadio San Paolo Stadium. Napoli dominated the game and notched up a sixth consecutive Serie A victory. Napoli reclaimed the top spot of the table with a comfortable win. Victor Osimhen and Lorenzo Insigne scored a goal each for their team.

Napoli is two points ahead of AC Milan in first place after experiencing a perfect start to the Italian Serie league campaign. Luciano Spalletti’s side registered four wins in six games. For the second time in history, Napoli has started the season with six consecutive wins since the 2017-18 campaign. Napoli finished as runners-up in that season.

The Nigerian footballer Victor Osimhen continued his impressive goal-scoring run as he once again netted and helped Napoli to win the game. The star striker scored the opener in the 11th minute.

Victor Osimhen fired the ball from the penalty area (6 meters) following a low cutback cross from Peter Zelensky. Osimhen has now scored four goals in five Serie A appearances for Napoli. He has also scored six goals in his last four games across all competitions.

Napoli finished the first half with a 1-0 lead. Napoli continued their momentum and dominated the second half with more possession. While Napoli played 7 shots on target, Cagliari had only one. Cagliari failed to have possession and create chances to score the goal. Napoli forward strikers played an attacking game with 92 percent of pass accuracy.

The Nigeria striker then won a penalty in the second half. The match referee awarded a penalty kick after Cagliari defender Diego Godin fouled Osimhen near the touchline. Lorenzo Insigne converted the spot-kick as the second goal for the hosts in the 57th minute and took the lead to 2-0.

The dominant Napoli almost extended its lead when Zambo Anguissa slotted a shot narrowly wide of the post. The Stadio Diego Armando Maradona crowd gave a standing ovation when Osimhen was replaced for the final 13 minutes of the game. Osimhen will turn his attention to the game against Spartak Moscow and will aim to extend Napoli’s winning streak.

Napoli scored 16 goals while conceding just two goals in the six games. Napoli leads the table by 18 points. AC Milan and Inter Milan are in second and third place with 16 and14 points respectively. On the other side, Cagliari suffered its fourth loss after being drawn twice. Cagliari is placed in the nineteenth spot with just two points from six games.