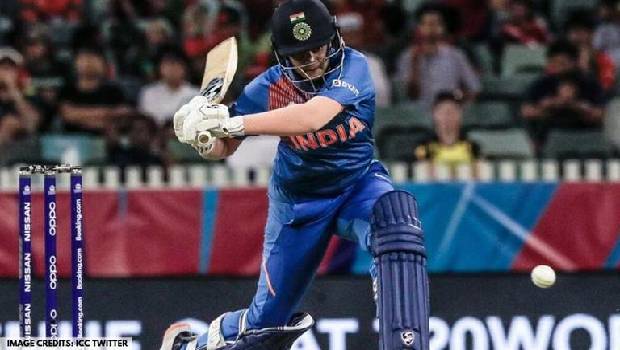 Indian women’s team pulled off an amazing win over the England team in the 2nd T20I on Sunday at Hove. Chasing 149 runs at a required run rate of 7.45 per over England was on top at 105/2in the 14th over, but the Indian bowling lineup did a sensational collapse and sealed a close 8 runs win. Indian women kept the three-match series alive with this win.

After being asked to bat first, India had a flying start. Shafali Verma looked more dangerous as she hit Katherine Brunt for five consecutive boundaries in the 4th over. England put back the pressure on India as both the openers departed one after another. Indian captain Harmanpreet Kaur and Deepti Sharma had a good partnership of 40 runs that helped India to reach a decent total of 148/4 in 20 overs.

England got off to a bad start as opener Danni Wyatt got bowled by Arundhati in the second over. In the successive over, Richa Ghosh ran out Natalie Sciver and reduced England to 31/2. Skipper Knight and Beaumont put on 75 runs for the third wicket. Searching for a wicket, Deepti Sharma got the wicket of Beaumont (59) in the 14th over.

England lost their wickets at regular intervals and as a result, they needed 24 runs from 18 balls. Poonam and Sneh Rana held their nerve and bowled very tight in the final two overs and restricted England to 140/8 in their 20 overs. Deepti Sharma was awarded the player of the match. Deepti scored a useful 24 runs and got the important wicket of Beaumont.

Tough times in NFL as Titans, Patriots and Chiefs produce COVID-19 positive cases
West Ham United sweep aside Derby County in FA Cup, set up a meeting with Manchester United
Neville give his take on the most frustrating player in the Liverpool team