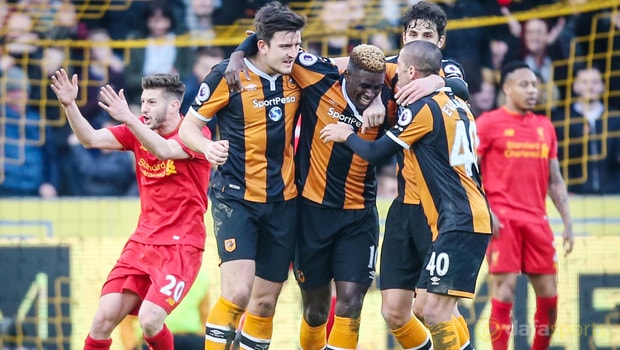 Alfred N’Diaye is confident Hull City can pull clear of the drop zone after his goalscoring debut against Liverpool.

The Senegalese midfielder joined the Tigers on loan from Villarreal during the January transfer window and opened his account on his debut as Hull downed Liverpool 2-0 on Saturday.

Despite the victory Hull remain in the bottom three, but N’Diaye is convinced they can avoid the drop down to the Championship.

“It was a very good victory for us,” he told the club’s official website.

“We’ve taken three points against Liverpool who are one of the best teams in this country, and the points are good for us in our situation in the table.

“With the spirit that we showed on Saturday we can climb up the table.” N’Diaye was delighted to grab a goal but he stressed he does not mind who scores as long as Hull win.

The 26-year-old has now called on Hull to get a result at Arsenal next weekend as they bid to climb out of the bottom three.

He added: “I’m really happy that I could score a goal in my first game, although the most important thing was that the team won the game.

“We play away against Arsenal next weekend and we will be going there to make it a good game. With the spirit that we have, there is no reason why we can’t go there and get something from the game.”

Hull are 18th in the Premier League table but are just one point adrift of safety after a seven-point haul from their last four games. The Tigers are 11.00 to secure a victory at Arsenal next Saturday and 1.70 to be relegated.