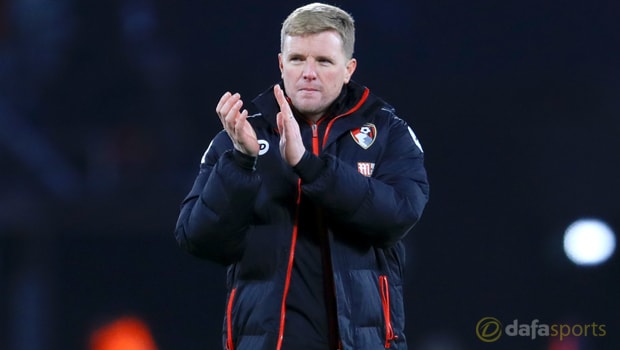 The Cherries’ poor run has seen them slip to 14th in the standings after a five-game spell in which they’ve conceded 16 goals.

Howe led Bournemouth to a 16th-place finish last season in their first-ever campaign in the top flight, and his side were ninth at the turn of the year.

Mostyn is in no rush to turn up the pressure on his manager and says the new year has traditionally been a challenging time for Bournemouth.

“Eddie is our manager and will continue to be our manager for the foreseeable future,” Mostyn told the BBC.

“It is always a concern when you are not winning games. Over the last three or four years the team have always had a poor run of form in January and February.

“I am totally convinced we will get back to winning ways. February presents us with a very difficult programme but the Premier League is topsy-turvy.”

After last weekend’s 6-3 loss against Everton at Goodison Park, Howe and his players host Manchester City on Monday before travelling to West Brom and then facing Manchester United at Old Trafford at the start of March.

“January was extremely frustrating,” Mostyn added. “The most frustrating thing of all is that we didn’t get anything over the line. But it was not for the lack of trying.

“Chelsea calling Nathan [Ake] back was a blow that was hard to take, especially when the manager lavishes praise on the club for the progress he has made and then he is likely to sit in the stand.”