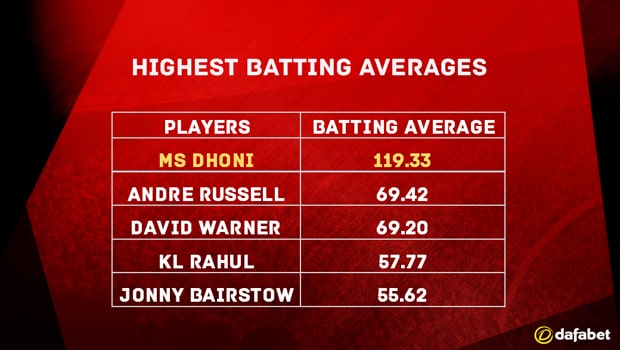 MS Dhoni’s waning big hitting abilities has always been a hot topic of discussion in Indian cricket. Until last year, he struggled on several occasions to up the ante of the innings after a good platform was set by the Indian top order. However, we are witnessing a completely different version, or rather a much familiar version of Dhoni, in the Indian T20 League this year. In a total of eight innings this season, Dhoni has amassed 358 runs at a mind-boggling average of 119.33. It is the highest average for any batsman this season. The next best is Andre Russell with a distant figure of 69.42.

Moreover, his tally of runs includes three fifties with a best of an unbeaten 84. Not only that, bowlers have found him to be a hard nut to crack as he has been dismissed in only three out of the eight occasions he has batted this season.

On top of that, he has batted in positions ranging from No.4 to 6, but that hasn’t hampered his consistency in any way. He is yet to register a single digit score this season and that is the most fascinating part about him. His lowest scores have been 12 against Mumbai followed by 16 against Kolkata. All other outings, apart from those two, have resulted in 30+ run knocks. 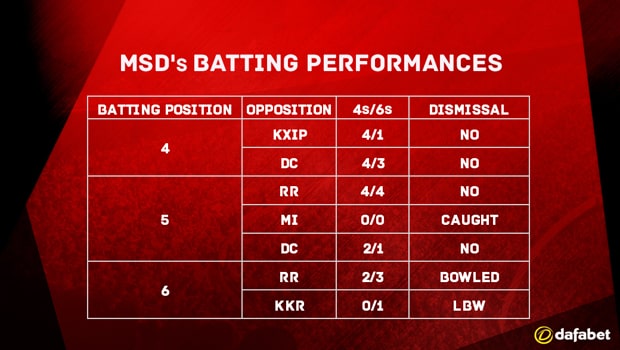 The former Indian skipper has been dismissed only twice during the death, once against Rajasthan in the 20th over—he had already smashed 58 runs by then—and another time against Kolkata in the 16th over, that was the only time he got dismissed before he could cause any sort of damage to the opposition. 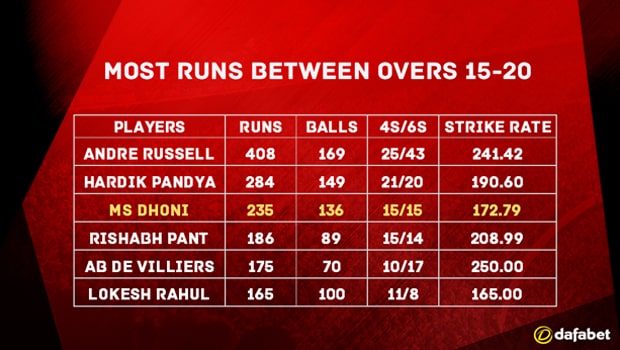 Dhoni also has the third highest tally of runs between overs 15 and 20 this season. Only Andre Russell and Hardik Pandya have scored more. His strike-rate of 172.79 shows why he is still a force to deal with towards the back end of the innings. The kind of form he has shown will give India high hopes during the World Cup next month. Dhoni, along with Hardik Pandya, will form quite a one-two punch to take down bowlers in the death overs during the mega-event in England.

I will be there when the IPL 2021 resumes in UAE: Shreyas Iyer
Indian skipper Rohit Sharma says Sanju Samson in Consideration
Too Early To Compare Virat Kohli, Babar Azam: Younis Khan