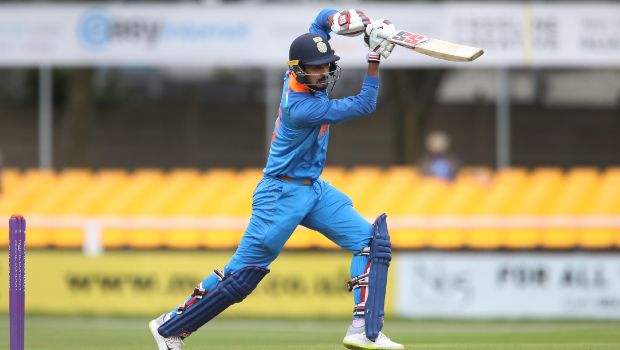 India defeated Ireland by 7-wickets to take a 1-0 lead in the two-match T20i series. Though Ireland put up a spirited fight, India proved too strong to register a comfortable win at the Village Stadium in Malahide. The rain-hit first T20I match was reduced to 12 overs a side. Chasing a target of 109, Deepak Hooda produced a superb show with the bat and took his side home with an unbeaten knock of 47-runs.

After opting to bowl first, India started on a strong note as Bhuvneshwar Kumar cleaned up Ireland captain Andrew Balbirnie for a duck in the first over. Indian skipper Hardik Pandya struck in the second over to add further pressure. Avesh Khan then took a wicket to reduce Ireland to 22/3 in 4 overs.

However, a solid 50-run partnership between Harry Tector and Lorcan Tucker (18) revived things for the hosts. Tector played a counter-attacking inning to score quick runs. Tector smashed an unbeaten 64 off 33-balls and helped his side post a challenging 108/4 in 12 overs.
In response, Ishan Kishan continued his form to give India a quick start. To everyone’s surprise, Deepak Hooda opened the innings in place of Ruturaj Gaikwad. Craig Young gave the initial breakthrough by bowling out Kishan for 26. He then dismissed Suryakumar Yadav for a golden duck.

After a scratchy start, Hooda found his rhythm to score runs at a strike of 162. Hooda and Pandya put up a match-winning 64-runs partnership for the third wicket. Pandya played a little cameo of 24-runs.

Krishnamurthy defends Velocity's decision to play for NRR and not for win
Jasprit Bumrah and Shikhar Dhawan maybe nominated for Arjuna Award by BCCI.
Rohit Sharma gives an update on Bhuvneshwar Kumar and Harshal Patel