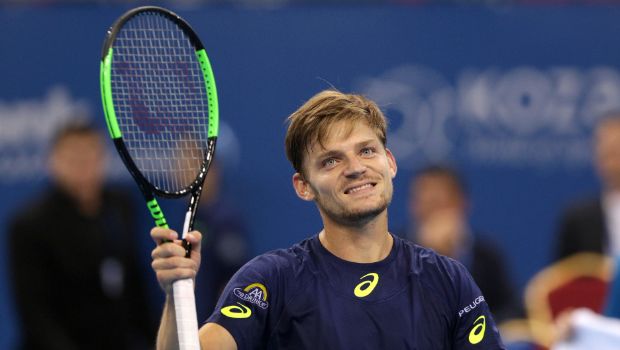 Carlos Alcaraz’s first match as the World No.1 player ended with a straight-set loss to David Goffin at the Astana Open on Tuesday. US Open champion Alcaraz suffered his first straight-set defeat since last November as Goffin made the most of his second chance as a lucky loser. The 19-year-old Spaniard fell to Goffin 7-5, 6-3 in an hour and 46 minutes. Carlos bounced back in the opening set before losing serve in the closing stages.

The Spaniard lost ground in the second set and failed to win a set for the first time in 2022, ending his streak of 67 encounters without a straight-set loss. Alcaraz was last beaten in straight sets by France’s Hugo Gaston at last year’s Paris Masters. The 31-year-old David won 17 points more than his opponent and had the upper hand despite serving at 53%.

The former world no.7 Goffin started the match quickly and troubled the US champion, Alcaraz, with his pace and consistency from the baseline to pull ahead. The Belgian defended seven out of ten break chances and turned over half of the return points into five breaks from 11 opportunities. Goffin created three break chances in the first game.

From 5-2, Goffin suffered a slight dip in concentration and Alcaraz used that opportunity to claw back to 5-5. However, World No. 66 broke again to secure the opening set and move ahead. The Belgian continued to attack in the second set against Alcaraz, who struggled to time the ball from all areas of the court.

Goffin clinched the second set’s opening game with a volley winner and forced the Spaniards’ mistake in the next one to grab a break and move 2-0 in front. Alcaraz squandered three break points in game three, and the Belgian raced into a 3-0 advantage with a service winner.

The teenager saved break points in game four to avoid an even more significant deficit before his rival held at love for 4-1. Goffin broke at love in game six after Alcaraz’s poor drop shot and served for the victory at 5-1. Goffin sealed his standout win when Alcaraz pushed a volley wide, letting out a roar.

Goffin now holds a 3-8 head-to-head record against players ranked no.1 in the Pepperstone ATP rankings. Goofin, who claimed the Marrakech title earlier this season, will next face Frenchman Adrian Mannarino. In another match, Daniil Medvedev powered to a 6-3, 6-1 victory over Albert Ramos-Vinolas.