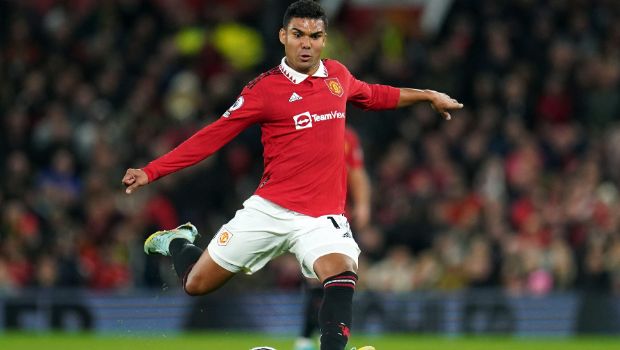 Manchester United cruised to a 3-0 victory over Bournemouth in a Premier League encounter on Tuesday night at Old Trafford. With a dominating win, Manchester United drew level with Newcastle United on points (35) in the Premier League table but trailing on goal difference. United has made it four wins from four without conceding in any competition. The Red Devils produced a fine performance to strengthen their grip on the fourth spot. Earlier, table-toppers Arsenal was held to a goalless draw by Newcastle but still extended their lead to eight points at the top.

Casemiro, Luke Shaw, and Marcus Rashford all scored as Manchester United took down Bournemouth easily. United manager Erik Ten Hag made four changes from the win at Wolverhampton Wanderers and that seemed to disrupt his team’s flow as they struggled to create many early openings. Chances were few in the Manchester rain in the first half, but Brazilian midfielder Casemiro did make one count by volleying home from a free-kick and gave his side the lead in the 23rd minute.

Christian Eriksen smashed a pinpoint cross onto the boot of Casemiro, whose controlled finish ensured his second goal for the club. Bournemouth never really threatened to get an equalizer. There was a downside for United as its midfielder Donny van de Beek picked up an injury in his second match of the season. The Dutch player was forced off after being clattered by Marcos Senesi. United went into the break with a 1-0 lead.

A rare goal from Luke Shaw doubled United’s advantage early in the second half. The 27-year-old English left-back completed a team goal with a fine sweeping finish in the 49th minute, his first goal for the club since March 2021. From thereon, the visitors showed some fighting spirit and created chances to score a goal. But United goalkeeper David De Gea produced a trio of fine saves to keep Bournemouth out of the game.

The Red Devils missed a flurry of late chances to add a third goal. However, the club’s top scorer this season, Marcus Rashford, added one more to his tally in the 86th minute and sealed an impressive win for his side. Shaw’s brilliant pass set up Rashford to score for the fourth successive match in all competitions. The win gives United a five-point cushion over Tottenham Hotspur in the fifth. Bournemouth stays 15th, two points above the relegation zone.