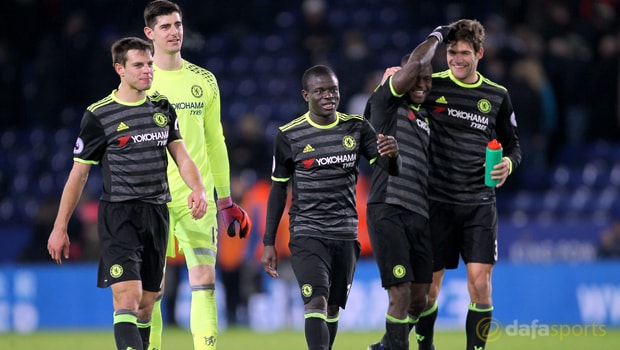 Chelsea midfielder N’Golo Kante has been told he needs to improve his play going forward by manager Antonio Conte.

The Italian labelled Kante an “extraordinary player” but he also revealed his desire to see the France international build on his play going forward.

Having helped Leicester City to a remarkable Premier League title triumph last season, he made the switch to Stamford Bridge and is well on course to win consecutive top-flight crowns.

Chelsea had struggled badly as defending champions last term, but the Blues now find themselves sitting on a nine-point Premier League lead with just 14 games remaining.

Conte has no doubts that Kante has played a significant role in their success so far this season but he sees room for improvement.

“Kante? An extraordinary player in terms of quantity and quality,” he told Sky Itlalia.

“He manages to cover a lot of the pitch, he’s always ready and willing, and he’s just a great player and a great signing for us.

“He has to improve his build-up play, but he’s that kind of midfielder, one who recovers the ball then makes a sideways pass. He needs to learn how to play the ball forwards to play in our strikers and our wingers.”

Chelsea have a chance to supplement their title advantage with upcoming games against Burnley, Swansea, West Ham, Watford, Stoke and Crystal Palace before the face Manchester City and Conte wants his team to send the correct message to any team hoping to catch them.

“My experiences as a player taught me that you will win a lot and lose a lot too and that instilled in me a fierce will to win,” he added. “Those who are out in front must not falter.

It sends a message to those who are following, an increasingly loud message, that we must make the most of this period.”