Posted by Dafabet Sports on September 5, 2018 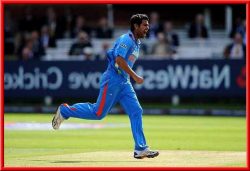 RP Singh, 32 the Indian fast bowler, retired form all forms of cricket on (Sep 4th), Tuesday, the 13th anniversary on his ODI debut.  He did so on Twitter with a short personal note.

Saying, “13 years ago, on 4th September 2005 was the first time I donned the Indian jersey. It was the stepping stone to what would become the most cherished moments of my life. Today as I hang my boots and call it a day, I wish to remember and give thanks to each and everyone who made this journey possible,” he mentioned.

He had begun his first-class career in the 2003-04 season. This he did so with a promising performance in the Under-19 World Cup in Bangladesh, where he had picked up eight wickets. Following it up with 34 wickets in six games he played for Uttar Pradesh.

He made into the national side that was looking for a fast bowler, and in 2005 he made his debut in the ODI against Zimbabwe at the Harare Sports Club, making an impression by taking two wickets in his second over. Thereafter making his Test debut in 2006 in Pakistan, claiming the Man of the Match award. He got his first five-wicket haul at Lord’s in the tour of 2007 where he played a huge role in shaping India’s win after a span of 21 years. Following up with great strikes in the inaugural T20 World Cup as India romped home against all odds.

RP Singh made a great start to his IPL career as well, claiming 23 wickets in the second season en route to winning himself the Purple Cap as well and Deccan Chargers, the IPL 2009 title. In 2011, he was called up at the 11th hour as a replacement for an injury-hit Indian team in England and returned wicketless after 34 overs at The Oval. He played the subsequent ODI series and then never played for the country. Singh finished with 40 wickets from 14 Tests and 69 further scalps from 58 ODIs.
“Even as I write this, there are conflicting emotions inside me. No matter how much one prepares for the day, there is no easy way to bid goodbye. But somewhere inside there is the voice that tells you – it’s time. And that for me is today. My heart and soul will always belong to that young boy who debuted at Faisalabad, Pakistan, who wanted nothing more but to feel the leather in his hand and keep playing but my body reminds me I am an old man who needs to make way for the young,” he wrote.