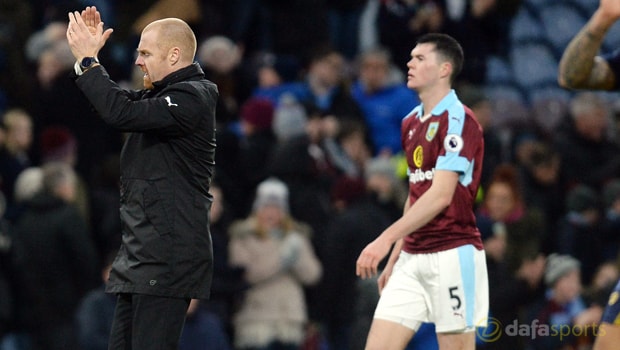 Sean Dyche has hailed the industry of his Burnley side after seeing them seal a fifth straight home win in the Premier League on Tuesday.

For all their woes on the road, Turf Moor has proved a fortress for the Clarets this season and Sam Vokes’ late strike was enough for them to further bolster their already impressive record with a 1-0 victory over Leicester.

The result moved the Lancashire outfit back into the top half of the table and came at the end of a busy day, with both Norwich’s Robbie Brady and Aston Villa’s Ashley Westwood arriving ahead of the transfer deadline.

Saturday sees Burnley go hunting their first away win of the season as they travel to Watford for a game they are 3.40 to win, with the draw 3.25 and the Hornets 2.10.

Having twice been relegated after just a single season in the top flight, Dyche seems to have found a formula that works for the club.

The 45-year-old believes their success has been down to the hard work of his players and has urged everyone at Turf Moor to continue pushing in the same direction.

“It’s been an interesting few days, for a few different reasons, as I’m sure you can imagine,” he said.

“But it culminated in a fine win and another really good night at the Turf.

“Teams find this a really tough place to come and there was no luck tonight.

It was a thorough performance against a very good side. “At the end of the day we’ve got a group here who give everything for every minute, so let’s all make sure we play a part in safeguarding that.”